Luca Di Pietro is the founder of Tarallucci e Vino on 83rd and Columbus Avenue and four other NYC restaurants. He’s been working day and night on a project that is already bringing New Yorkers together to boost the morale of first line responders at local hospitals and longterm care facilities. And, at the same time, he hopes the initiative will keep the lights on. This means keeping his restaurants in business and allowing his employees to return to their jobs. 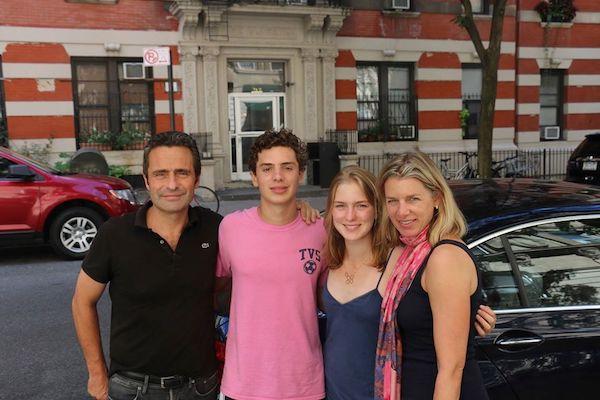 Di Pietro’s wife Kate, a former Senior Producer at ABC News, and college age children, are all involved in saving the family business and in the outreach to health care workers. Isabella, a senior at Harvard, majoring in History and Literature, worked overnight with friends to produce the Feed the Frontlines NYC website. Ian, a Freshman at Williams College, is also engaged with Feed the Frontlines NYC.

The concept is straightforward, but demanding in coordination and execution. Friends, regular customers, and all others who wish to support Feed the Frontlines NYC can indicate on the website how many meals they wish to purchase: feedthefrontlinesnyc.org

Then, the Di Pietro family coordinates with local Emergency Departments so that they prepare to receive the meals for staff members. “They are so overwhelmed, most do not have time to go out looking for something to eat,” said Di Pietro.

The idea is catching fire, and Di Pietro not only has regular customers writing checks, but understandably health care facilities are deeply appreciative of the effort to help those who are coming to its doors to be treated for life-threatening coronavirus-related illness.

Feed the Frontlines NYC plans took shape when Kate’s friend Adair Roberts, who lives in Toronto, heard that NYC restaurants were mandated to close. Her question of how she could help resulted in offering to cover 40 meals to be delivered to Emergency Department staff members. Then, the idea expanded. “$37,000 has already been raised,” said Di Pietro. Deliveries have been made and are scheduled to go to Bellevue, NYU Langone Brooklyn and Manhattan and Columbia Presbyterian.

Di Pietro was initially making all the deliveries but happily, a friend and fellow soccer player offered to make a Brooklyn run this weekend. Di Pietro says his hope is that more funding will be contributed and also that a regular schedule will be established so that he can anticipate future needs and coordinate preparation of meals.

Di Pietro is originally from Nereto, a small town in Abruzzo, Italy. He and his wife met as university students in Bologna. Eventually they settled in New York City. Di Pietro can’t praise NYC enough. “I love the city. It’s a great city. So accepting, really cosmopolitan and accepting of a foreigner trying to make a life.”

He had been working as a sales rep for a large Italian coffee company and continued with that as his day job when he took over a small bakery in the East Village. He transformed it into an Italian cafe and then expanded it into a restaurant. That success led to opening more restaurants. With the current crisis, Di Pietro was forced to let 100 workers go. But already since launching Feed the Frontlines NYC, he has rehired about 15 workers and he hopes to rehire many more.